The Women's League Christmas Dinner is scheduled for Tuesday December 6, at 5:30 p.m. at DeLuca's Restaurant (27424 Warren Road at Inkster Road). The cost is $20 per person. There is a $15 limit for the gift exchange.

Meetings are held on the second Saturday of the month, with refreshments at 9:30 a.m. and the meeting starting at 10 a.m. The next meeting is January 14, 2023.

The SOTC Women's League is grateful for the blessings received on LWML Sunday (October 2). The prayers for our work and the monetary blessings received continue to encourage us. We collected $1,190 - well over our goal of $800. These mites will be sent to the Michigan and National LWML for Mission Grants. 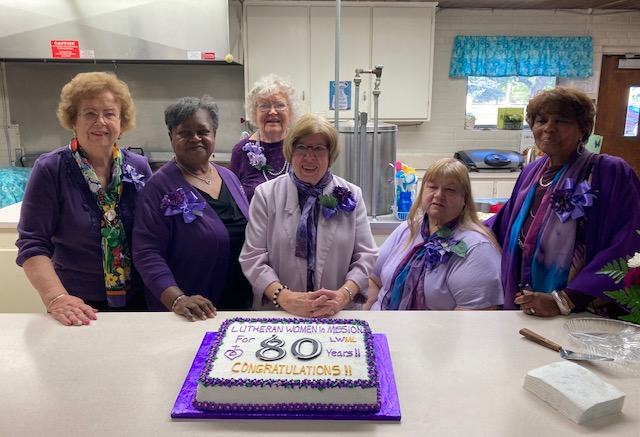 The Women’s League of Shadow of the Cross Lutheran Church is a society that is an integral part of the International Lutheran Women’s Missionary League (LWML). The organization’s motto is from Psalm 100:2, “Serve the Lord with Gladness.”

We focus on affirming each woman’s relationship with Christ, encouraging and equipping women to live out their Christian lives in mission ministries and to support global missions. All confirmed women of the Lutheran Church-Missouri Synod are members.

Our group here at Shadow of the Cross belongs to the Wayne Oak Hills LWML Zone and the Council of Lutheran Women of Southeastern Michigan. General membership meetings are held at 9 a.m. on the second Sunday of each month, beginning in September and ending in May (except December). We support many different outreaches and projects, including international, national, and local charities through such activities as collecting mites, conducting fundraisers, and assembling in-gathering items.